I was deep into my job search, when I received and email from my freelance account on Upwork.com:


“We read your resume, and think that you would be a good fit for our full-time position.”

Naturally, I was curious, and replied via email. The person (who went by the name, “Nelson George”) claimed to be a part of a data entry firm owned by a biotech company (which I will not name here – but it’s not relevant, it could have been any large company), and provided me with a link to the company. I quickly researched it, and found that they are indeed a legitimate business, and a rather large one at that.

Secondly, my going rate on Upwork.com is $18 an hour, and the company was offering $20 an hour during training with an increase to $40 an hour afterward. Now, I’m not one to look a gift horse in the mouth, but I’ve never heard of a data entry job (and yes, I’ve had several) offering that kind of money, especially when the other party is asking for so little. I decided to see how far the rabbit hole went.

“Nelson George” suggested that we have a chat via Google Hangouts rather than a simple phone call (yes, the company I was given a link to has its own contact page with its own chat script, so red flag number 3). We initiated the chat, and he asked me why I’d be the best person for the position. I gave him info that could easily be found on the internet, being very careful not to give him too much, just to see what the scam could be.

After giving him my carefully scripted background info, he said (surprise!) that I would be perfect for the job, but I would require software from one of their vendors to get started. This is where I knew something was definitely up. I carefully explained that I didn’t have the money to purchase said software, and he stated that the company would FedEx me a check to deposit that would allow me to buy the software and keep whatever was left over.

Now let me ask you, the reader: Does that sound like something any company you’ve ever worked for would do? At this point I knew it was a scam, but I played along for a while. I would not give him any banking information, passwords, or my social security number (it was only a matter of time until he asked).

“Nelson George” e-mailed me an acceptance offer letter that he wanted me to sign and send back.

NOTE: Before opening anything sent to you by a potential employer, scan the document for viruses. Also, if it’s an MS Office document, make sure that your program macros are turned off by default or it could open a viral script upon opening.

The “letter” was a Microsoft Word document with about a hundred misspellings, grammatical errors, letter case mistakes, and other errors PER PAGE. Plus, take a look here: 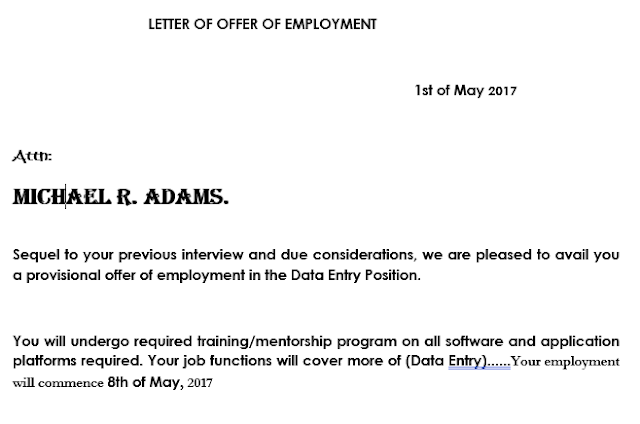 That font that my name’s written in? That’s “Algerian.” Now, I don’t know for certain how many pages a real large-scale business produces annually, but I’m damn sure that none of them use “Algerian” as a font on a serious legally-binding document. In fact, the document used like five different fonts (you can see four of them in the example above).

Still, I filled out the letter (again, not using any info that isn’t out there already) and sent it back to them. That’s when the “accounting” questions began.

“What bank do you use? Do you have a cell phone banking app? What’s your bank’s limits for daily deposits?”

The jig is up

I started to get a picture of what the scam actually was, but for confirmation at this point I asked “Nelson George” what the scam was.

“Scam? What scam?” he asked in turn.
“Well, you’re offering me more than what I asked for, your letter has more than a few errors in it (including the capitalization on your surname), you’re not using a company email address, and I can’t find you listed as the head of HR on any of (the company’s) online materials.” I replied.

The conversation was disconnected at that point, and “Nelson George” dropped off the face of the planet (possibly forever).

What the scam was

What I think these companies do is get you to print out a bum check. Of course, when depositing a check to the bank (even using an app) it takes time to clear and there are limits to how much you can withdraw.

Here’s where I have diverging hypothesis on the middle of the scam. They might have you purchase the software from their “vendors” (which is in fact the person acting as “Nelson George”), effectively stealing the funds before the check bounces. They might also be having you purchase the software from a legitimate source and having you give them the licenses so that they can sell those for later profit. They may even be able to parlay a problem with the check into you giving them money or your bank account information directly.

Either way, the scam ends the same way: You take money out with a fake check, they get a piece of you, and when the bank wants its money back you will be on the hook.

Be on the lookout for these things. Putting your resume and contact information online is essential to job seekers, but as with anything once the genie is out of the bottle it’s nearly impossible to put it back in.